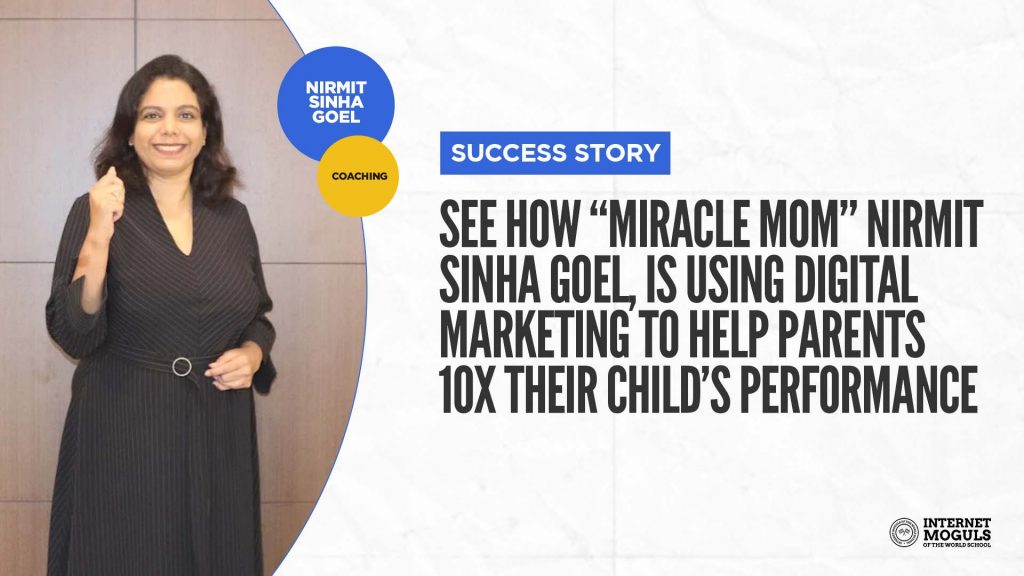 If you are a parent who wants their child to be a champion despite their weaknesses, read it all the way through.

Hello, my name is Nirmit Sinha Goel, and I am the mother of two amazing daughters. One of them was born deaf, and I refuse to settle for anything less than the best for my children.

I am now an author, life coach, and parenting expert known as ‘Miracle Mom,’ although I did not set out to be one. God presented me with a challenge, and I had no choice but to accept it. I’m a parent like you, and I, too, was taken aback when I learned of my daughter’s hearing loss. I abandoned my bright corporate career in order to make her better than the best.

Thus began my voyage of study, and believe me when I say there is very little available on the internet. So I began meeting specialists, took multiple courses, employed the law of attraction, applied all of my brains and skills (by the way, I am an MBA from S.P.Jain, one of India’s top MBA universities) to find the best approaches, and when I couldn’t find it, I created it myself. I really didn’t want to leave anything to chance.

As a business graduate, an artist at heart, and a parent at heart, it was natural for me to build result-oriented strategies that assisted her in overcoming her limitations and blossoming multidimensional.

The outcomes were remarkable. Despite the fact that she began hearing first noises at the age of 2.5 years, a phenomenon that begins in the womb, my child was mainstreamed at the appropriate age. What does this imply? It means she might learn the same level of language in one year as a youngster would ordinarily accomplish in three years.

Today, she is performing well in academics, is an ace Sportsgirl, and has become a digital literacy champion of her school in App design for the second year in a row – a competition from class IV – XII that she won last year while in class IV and this year while in class V.

This Women’s Day, I, too, was recognised as a woman of substance as a ‘Miracle Mom.’ Now that my child is established, I’d like to share all of my research, expertise, and skills with other parents going through a similar experience. The developmental milestones of all children are the same, as is the trip. I’ve created a fantastic course that will help parents 10x their child’s performance from wherever he or she is now.

I am convinced that all parents have the ability to perform miracles in their children’s lives. You can accomplish it if I can do it with such a tremendous task.

My aim of assisting parents in 10xing their child’s performance (particularly children with hearing loss) sounded grand and great, but when I arrived, the situation had entirely altered. The digital world seemed intimidating. Despite my extensive expertise with motivating presentations, the online platform was an entirely new ballgame. The more I tried, the more complicated it became. It was overly technical, making me feel like a digital illiterate. I purchased a couple of courses, but they were little more than recorded videos of what I already knew. Initially, all I needed was a little handholding. During this journey, I felt really lonely.

I received 1000 percent value, step-by-step assistance, and much-needed handholding from the captains throughout the initial training. This was exactly what I needed, and I was the first to enrol in the school. I was a perfectionist before coming here, but I learned that taking imperfect action is preferable to waiting for things to be perfect. I began to take action, and the community was always there to back me wholeheartedly anytime I needed it.

My quest, which I had been planning for over a year, has finally begun to take shape. I was able to get a micro-niche in which I was highly interested. I purchased a domain for my business two years ago, but when I approached website developers, I was absolutely unsure whether to go with a website, a funnel, or a landing page. Now that I have a better grasp, I’m working on creating my website. Every day, I learn something new about the crucial parts of running an online business, and the best part is that I’m not alone on this road. Because I’m in action, it’s a roller coaster ride, but it’s fun and there is development.

PrevPreviousDiscover the secret strategies that helped Dr. Paramjeet Singh to scale his memory coaching business online
NextHow did IMOTWs helped a second generation Auryvedic doctor to establish her own brand?Next

here are some more epic stories from our community:

How to Choose a Write My Essay Service

Find an Essay Writer Online to Write My Essay For Me

Internet Moguls Of The World School © 2021. Read our T&C. Developed by HarshGogia.com

This website uses cookies to improve your experience. We'll assume you're ok with this, but you can opt-out if you wish.
Cookie SettingsAccept All
Manage consent

This website uses cookies to improve your experience while you navigate through the website. Out of these, the cookies that are categorized as necessary are stored on your browser as they are essential for the working of basic functionalities of the website. We also use third-party cookies that help us analyze and understand how you use this website. These cookies will be stored in your browser only with your consent. You also have the option to opt-out of these cookies. But opting out of some of these cookies may affect your browsing experience.
Necessary Always Enabled
Necessary cookies are absolutely essential for the website to function properly. These cookies ensure basic functionalities and security features of the website, anonymously.
Functional
Functional cookies help to perform certain functionalities like sharing the content of the website on social media platforms, collect feedbacks, and other third-party features.
Performance
Performance cookies are used to understand and analyze the key performance indexes of the website which helps in delivering a better user experience for the visitors.
Analytics
Analytical cookies are used to understand how visitors interact with the website. These cookies help provide information on metrics the number of visitors, bounce rate, traffic source, etc.
Advertisement
Advertisement cookies are used to provide visitors with relevant ads and marketing campaigns. These cookies track visitors across websites and collect information to provide customized ads.
Others
Other uncategorized cookies are those that are being analyzed and have not been classified into a category as yet.
SAVE & ACCEPT
Scroll to Top

Thank you for visiting Internet Moguls Of The World School.

We know you want to grow your business.

So get our “MVM crash course” module free

Half of the money you spend on marketing is wasted, and you don’t know which half.

From today onwards, this will not happen & you will get the exact framework to build and implement a successful marketing plan to get positive ROI on every rupee spend on Marketing.